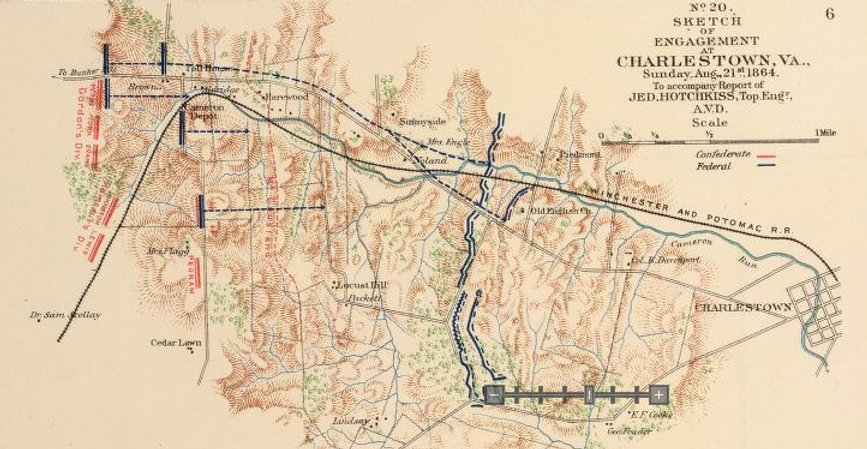 White House Farm, located along the Summit Point-Charles Town Road, is perhaps the oldest house in the Summit Point area. The property was deeded to Dr. John McCormick, an Irish physician, in 1740. An early plantation in the vicinity of Summit Point was the Bullskin Plantation, purchased by eighteen-year-old George Washington in 1750. He bought 453 acres along the North Fork of the Bullskin Run from Robert Rutherford. Over the next several years, George Washington added another 1,558 acres to the
plantation. By 1755, he built a small stone building where he stayed during his brief visits to the plantation. This portion of the property was later called Rockhall. In 1769, he divided the remainder of the property into 200-acre (0.81 km2) tracts, which he leased to tenant farmers. Washington owned the vast Bullskin Plantation tract until his death in 1799.

Summit Point was the scene of the Battle of Summit Point during the American Civil War on August 21, 1864. This inconclusive battle occurred during Major General Philip Sheridan’s Shenandoah Valley Campaign which took place between August and December 1864. As Maj. Gen. Sheridan concentrated his army near Charles Town, Lt. Gen. Jubal Early and Maj. Gen. Richard H. Anderson attacked the Federals with converging columns on August 21. Anderson struck north against the Union cavalry at Summit Point. The Federals fought effective delaying actions, withdrawing to near Halltown on the following day. The battle resulted in approximately 1,000 casualties.

In the 1960s, Summit Point began to grow. New housing developments and other construction continue to date, creating a wide-spread community around the periphery of this historic town.